Yesterday we asked for your support and you delivered!

Ismailimail is most grateful to our readers for the outpouring of support to help Salima reach her goal.

Over 450 amazing people exercised their commitment to making a world of difference. Salima has reached and exceeded her target of $40,000.

We bring you one of her remarkable moments pitching the Soular Backpack at the Global Social Business Summit. Watch the YouTube video below, following her picture with Nobel Peace Prize Laureate Muhammad Yunus. 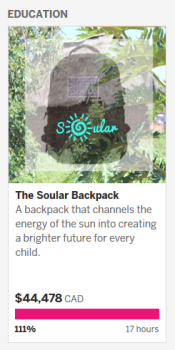 About the Soular Backpack

Over the past 6 months, I designed and put together The Soular Backpack, which would allow kids in rural areas to leverage the power of the sun on their long walks to  and from school every day.

The backpack would have a solar panel on it, whose storage battery would later connect to an LED lamp, hence allowing children in rural areas, who have no access to electricity or who use kerosene, to study through the night. 3-4 hours in the sun would result in 7-8 hours of light.

The first prototype has been manufactured.

From the age of 4, my parents ensured that my siblings and I understood the complexities of poverty, and that as I grew as an individual and learnt more about the world, I also needed to ensure that the people around me, grew too. Every year since I was very young, I would collect the money I got for my birthday and sponsor an additional child’s lunch for the entire year at the Kikambala Primary School, until a feeding program was introduced.

When I was 12, I formed a social business entity which employed local women from the Kikambala village to make jewelry that I designed. This was sold at a local boutique, and the money raised went towards funding a girls’ choir, so that they could develop a talent and passion, giving them an incentive to stay in school and not turn to child prostitution. Two years later, this choir stood first nationally in all categories at the Kenya Music Festival.

Since then, I have had the opportunity to implement projects with UNICEF, Microsoft and the Government of Kenya, and carried out initiatives in healthcare, education and childrens’ rights.

In 2010, I was invited by Her Highness Suzanne Mubarak to attend the “End Human Trafficking” Conference in Egypt, among delegates such as His Highness the Aga Khan.

This exposed me to child trafficking and modern day slavery, which is a reality for millions of children who do not have an income, or an education to fall back on. The Soular Backpack is an intervention that can break this cycle.

Via Indiegogo | The Soular Backpack

Earlier & Related about Salima Visram from the Ismailimail Archives:

Spotlight on Spirit of Service: