CNN World has just published a significant article on the Imamat of Aga Khan. With Pictures at the site. Enjoy!

A 50-year history of development

By Sylvia Smith for CNN

(CNN) — The works and achievements of the influential spiritual leader of the Shia Ismaili Muslims have long been baffling to categorize.

But as this rather enigmatic figurehead pays an official visit to East Africa the results of his work in rural development, education and healthcare on the continent are sparking interest.

In much the same way he has already attracted attention with investment in small and medium size enterprises which indirectly provide employment for hundreds of thousands in a swathe of countries across the continent.

Prince Karim Al Husseini, who is the 49th Imam of the Isamailis and the 49th Aga Khan, is celebrating 50 years as religious leader and visiting Kenya the country of his childhood.

Through the Aga Khan Development Network, the world’s largest private development agency, countries as diverse as Mali, Rwanda, Egypt and Tanzania have benefited from a wide range of projects.

The programs have been aimed at a reduction in poverty, a boost to education, basic health care, micro-finance for the poor and promotion of private enterprise. there has also been a drive to revitalize certain historic cities and a prize for architecture and the protection of culture.

The Nation Media group was founded by the Aga Khan in 1960 and now has a growing number of newspapers, magazines, and radio and television stations in English and Kiswahili. It now also operates in Uganda and Tanzania.

The Nation is the most influential media group in East Africa and has its origins in two papers set up to give the region a distinctive, national voice as Kenya and the surrounding countries geared up for independence. Today the Nation still has an independent stance on major issues and is majority owned and run by Kenyans.

In Kenya recognizing that marketing and expansion are of equal importance, has helped small-scale farmers export slim green beans or “haricot vert” directly to European supermarkets.

The Aga Khan Fund For Economic Development’s Frigoken has invested in providing seeds, fertilizer and expert growing advice to more than 20,000 farmers scattered throughout the country. By setting up collection points and building a factory where the beans are topped and tailed and processed profits are maximized and farmers are assured of a regular market for their goods.

The Aga Khan Award for Architecture was set up 30 years ago to reward outstanding examples of contemporary design, social housing, landscaping, environmental awareness and community enhancement relevant to the Muslim world.

There have been many African winners of the award; among them Mauretania’s Kaedi Regional Hospital which uses local materials to create a network of bee-hive shaped building connected by small corridors. These rounded structures are reminiscent of traditional housing and can easily be closed off turning a pod into a isolation ward.

In Egypt’s capital a 500 year-old rubbish tip was imaginatively turned into a green and verdant space, the Al Azhar Park. The adjoining “historic” neighborhood of Cairo has undergone a transformation with the Aga Khan Development network also funding the restoration of mosques and cultural architecturally significant buildings.

The impoverished area of Darb-El-Ahmar has been boosted by increasing numbers of visitors who are attracted to the park’s lush and spacious slopes from where they enjoy spectacular views over the Islamic city.

In 2004 the new library in Alexandria, or the Biblioteca Alexandrina, was recognized as putting the city back on the intellectual map as a center for learning and culture. It is an echo of the legendary “knowledge center” of classical antiquity used by the likes of Aristotle.

The construction has also given Egypt’s second city a landmark building and in its funding, design and concept has emphasized the possibilities of international collaboration.

Restoring Zanzibar’s Old Stone Town and historic sea front buildings is part of an initiative to revitalize the island’s heritage tourism. With many of the building crumbling and in danger of collapse, the Aga Khan Trust for Culture has restored landmark buildings to a high standard combining the renovation with providing top quality accommodation.

The disused telegraph building was transformed into the Zanzibar Serena Inn and the former old dispensary into shops and offices. The initiative has grown and UNESCO has recognized the Stone Town as a World Heritage Site. 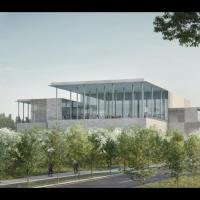