The RBC Top 25 Canadian Immigrant Awards is a people’s choice awards program that recognizes inspirational immigrants who have made a positive impact on their communities since arriving in Canada. As the first Canadian national award program, the RBC Top 25 Canadian Immigrant Awards recognize the achievements of all immigrants including community advocates, volunteers, successful entrepreneurs, cultural icons. 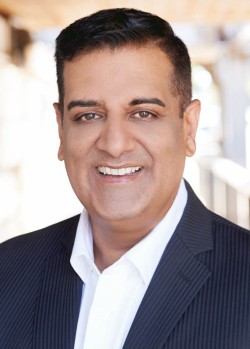 life since he came to Canada as a refugee in 1973. These values have framed his business leadership style, too, in an impressive health care management career helping lead organizations such as Health Quality Ontario, North York General Hospital and Canadian Institute for Health Information. He has focused on mentoring and developing diverse teams.

Today, Ladak serves as president and CEO of Compute Ontario, where he leads a team that brings together scientific, technical and policy-making communities using big data with access to advanced research computing (supercomputers).

It’s a long way from fleeing Uganda after South Asians were expelled from the African country by President Idi Amin. “When we arrived in Canada, we only had the clothes on our backs, a few mementos and legal documents like birth certificates. My father and mother went door to door seeking work so that they could house, clothe and educate their three children. It was through Canada’s support services that my siblings and I are where we are today,” says Ladak, who was able to pursue higher education thanks to grants and bursaries. “We are evidence that Canada’s social net does work and can produce proud Canadians that happily give back to others.”

When it came time to choose a career, Ladak says, “I chose the one thing that is as Canadian as the maple leaf — publicly funded and administered health care.”

And his mantra became “pay it forward,” says Ladak, who also serves on the board of directors of ENCQOR, a $500 million public-private collaboration to develop a 5G corridor between Quebec and Ontario. “Canadian society is built upon the values of a hand-up, not a hand-out. This is the philosophy that guides my professional activities, mentorship, leadership, volunteer work and philanthropic activities.”