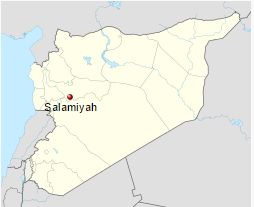 Salamiyya, in Syria,was one of the chief centres of the earliest Ismaili activities. When Imam Muhammad b. Ismail succeeded his father to the Imamat (sometime between 754-763), he went into hiding to avoid persecution, thereby commencing the dawr al-satr (period of concealment) in early Ismaili history. His whereabouts were known to only a few trusted disciples. Imam Muhammad b. Ismail dispatched dais to various areas in Persia. During the time of his son and successor, dais began to achieve major success. This aroused the hostility of the local authorities, who attempted to arrest him. The Imam migrated to Salamiyya in 870, then a small town far from the major urban centres where visits from his dais could not be easily noticed by the authorities.

It was in Salamiyya that his next three successors were able to establish the headquarters of the dawa. However, when the events became turbulent, Imam al-Mahdi left Salamiyya in 902, eventually settling in Morocco in North Africa, where the Ismaili dawa had achieved its most enduring success. In 909, Imam al-Mahdi established the Fatimid caliphate in North Africa.