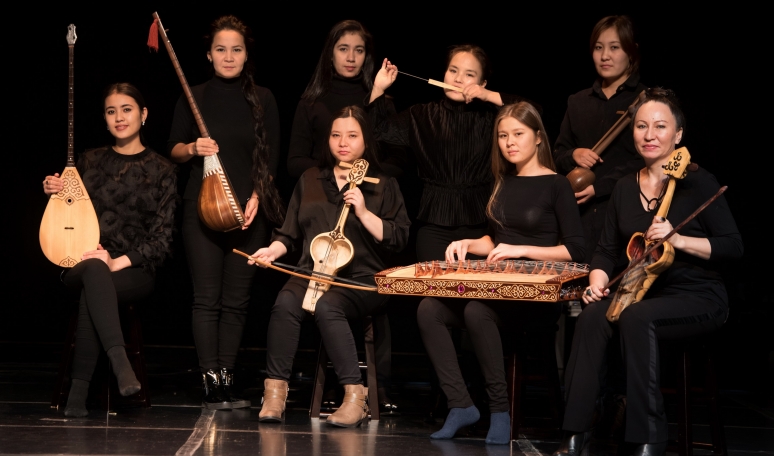 Geneva, Switzerland, 28 February 2018 – The Aga Khan Music Initiative (AKMI) breaks new ground as a producer and incubator of cutting-edge artistic work with the multimedia production Qyrq Qyz (Forty Girls), whose world premiere will take place at Dartmouth College’s Hopkins Center for the Arts on 1 March, 2018. Following performances at Dartmouth, Qyrq Qyz will travel to other venues in the northeastern United States before winding up a month-long USA tour at the prestigious Brooklyn Academy of Music on 23-24 March.

Conceived and directed by award-winning Uzbek filmmaker Saodat Ismailova, an AKMI collaborator since 2003, with a musical score composed and arranged by Dmitri Yanov-Yanovsky, one of Central Asia’ most internationally visible and acclaimed artists, Qyrq Qyz is based on a monumental yet little-known Central Asian epic that celebrates powerful women and women’s power through the exploits of an intrepid young band of “Amazons of the steppe.” The new production brings together film and live music performed by some of the boldest talents in a rising generation of charismatic female bards from Kazakhstan, Karakalpakstan, Kyrgyzstan, and Uzbekistan, all of whom have been specially tutored by master musicians in their respective traditions working within the worldwide education programme of the Aga Khan Music Initiative.