For our faith constantly reminds us to observe and be thankful for the beauty of the world and the universe around us, and our responsibility and obligation, as good stewards of God’s creation, to leave the world in a better place than we found it.

The garden is, in this context, a particularly important space in Islamic cultures, the Moghul garden in urban environments, or the Bustan in rural environments. Bringing such beautiful spaces to Canada is one of our intended contributions to Canadian landscape. An example is the new park in Toronto which will surround the Aga Khan Museum and the Ismaili Centre, as well as new projects in Edmonton and Burnaby, and our endeavor to link area development to our rebuilding of Ottawa’s War Museum for the Global Centre for Pluralism.

The Holy Quran has more than 120 references to the  Gardens of Paradise (Jannat al.-Firdaus) ranging from notions of blissful retreat to serene and safe refuge. Numerous messages of “Peace” (Salaam) inform the sentiment and vision of the Gardens of Paradise.

These gardens are the prototype on which all Islamic gardens  of the chahar-bagh design are based. One of  the principal functions of these “Gardens of  Paradise” is to provide beautiful and harmonious surroundings, eliciting felicity, where the soul can be at peace and feel close to God.

Prophet Muhammad is known to have said that the greater jihad  (al-jihad al-akbar), is the war we fight  with our own soul. The subconscious longing of our soul,  for felicity and serenity, is like a vague memory of our primordial state  before the Fall when man was at peace with his Creator and therefore at  peace with himself and his neighbor. In order to regain this primordial  paradise, those seriously committed to the spiritual path  must reach a state of constant remembrance of God (dhikr Allah).

The  Islamic garden can be an aid in this remembrance; like all sacred art,  the chahar-bagh aims to draw the visitor closer to God. Thus the concept  of paradise is symbolic of the true peace of heart and soul for which  we all yearn.

The chahar-bagh is a garden divided into four by water-channels or pathways, with a fountain or  pool at the center. This four fold design of the Islamic garden developed  from a combination of the ancient Persian prototype and the Gardens of  Paradise as described in the Quran and the Sayings of the Prophet.

Also,  inherent within the number four is a universal symbolism based on an  understanding of the natural world: it encompasses the four cardinal  directions, the four elements and the four seasons—and the cube, the  three-dimensional form of the number four, represents solidity, the  Earth.

The religion of Islam re-confirmed these ancient and universal  truths and invested them with a rigorous spiritual vision. In describing  his ascent to heaven (mi’raj), the Prophet speaks of four rivers: one  of water, one of milk, one of honey, and one of wine. These four rivers  are also mentioned in the Quran (Surah 47: Ayats 15,2).

Thus the chahar-bagh became the principal symbol of the Quranic Gardens  of Paradise.

Water is the supreme element in the Islamic garden, both  on a physical and a metaphysical level. On a purely practical level, life on earth cannot  survive without water; water is life-giving and in hot climates it is  far more than this — it is a blessing from God. Water is also considered a direct  symbol of God’s mercy. The idea of mercy and water is further reinforced in the Holy Quran, “He … sendeth down water from the sky, and  there by quickeneth the earth after her death” (Surah 30: Ayat 24). However, water  contains within itself far more than physically nourishing properties;  as Titus Burckhardt beautifully explains, “the soul resembles water,  just as the Spirit resembles wind or air.”

The concept of water as an  image of the soul is a universal symbol appearing in Christian, Hindu,  Japanese, and many other cultures as well as Islamic —and this  symbolism derives from its very essence.

Water is used not just to  cleanse ourselves of physical dirt but also to “wash away sins.” Examples include baptism in  Christianity and ablution before  prayers in Islam – water is used to cleanse the soul as well as the body.

“I hope today that all the people of Toronto will feel that the park that will be around these building is their park!”

Torontonians are sure lucky, as is the whole of Canada with the Aga Khan’s benevolence! 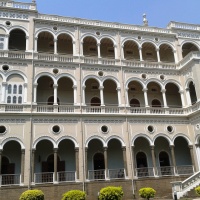 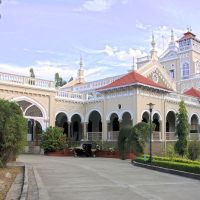